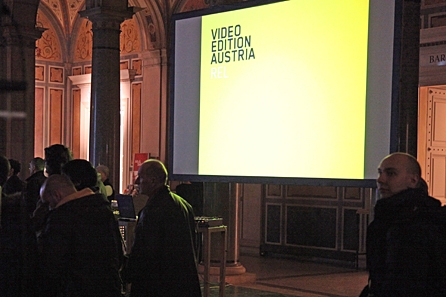 In a four-part DVD edition by Medienwerkstatt Wien, film and media art by 79 Austrian artists from 2002 to 2008 is documented with a total length of 693: 25 minutes. release 02 is a continuation of a video series that started in 1994. Since that time, not only has a wealth of new works by established video artists and documentaries emerged, a new generation of media artists has also established themselves, who have gained a foothold in international exhibitions and festivals.

All 79 videos are shown in the MAK NITE©, Alexandra Reill‘s experiential short white chairs being part of the selected works.

The visitor wanders through the media stations arranged in the columned foyer hall of MAK – Museum of Applied Arts. In line with international practice, the program is no longer classified according to the categories of art or documentary film, but consists of eight thematic focal points developed by the curating team Eva Brunner-Szabo, Gerda Lampalzer-Oppermann and GANGART (Simonetta Ferfoglia / Heinrich Pichler).