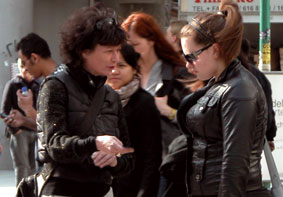 Grandchildren’s Questions is a documentary film continuing the filmmaker’s work and research on the prolongation of the existence of myths of denial in the context of NS-“Vergangenheitsbewältigung”. The filmmaker researches the specific history of Vienna: in the interviews held, she examines relationships between contemporary xenophobia and historical traces of fascist or fascistoid identity in a so called “majority” society in Vienna by not only interviewing people on their opinions on integration and interculturalism but also posing a personal question: which “stories” from the NS-period did the family pass down to offspring?

This question leads far: How common are traditional myths of denial of active naziship or sympathization / followship still today? Are there regularities in the repetition of standard answers and, if so, which ones are they? What are the connections between today’s everyday racism, and how do such traces contribute to today’s xenophobia? What is the current status of consciousness regarding interculturalism and multiculturalism?

Alexandra Reill, in a number of projects, e.g. the tour against everyday racism REAL ONES ALWAYS SURVIVE or WOULD WE SAY NO ? with which she and a team of cultural and social workers toured almost all so called “workers’” districts of Vienna, led dozens of conversations with people on the subject. She learned one thing: the more myths of Naziship denial are hidden the stronger they affect and are an obstacle to an openness towards interculturalism. The more they lay hidden and are unnoticed as a result of “truths” passed on to the next generation the stronger they live on.

Alexandra Reill’s video installation in public space WOULD WE SAY NO ? III created the opportunity to unveil such myths of denial that are often undetected and classified as “normal” – by talking about the myths, the past and what was passed down. The results of the talks the film maker shows in her documentary.

Furthermore, our thxs go to