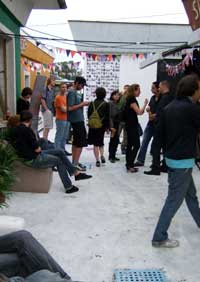 REAL ONES ALWAYS SURVIVE or WOULD WE SAY NO? V

MIK is a mobile project that operated in the neighborhood Hirschstetten in the Donaustadt district of Vienna in order to enrich the range of art and cultural events in the area and to deal with and create access to contemporary art on site. On invitation of Pamela Bartar kanonmedia participated with a wall installation of its project / [post-] card series REAL ONES ALWAYS SURVIVE or WOULD WE SAY NO? I comparing sociopolitical polemics around the theme of work used under the NS-regime and in Vienna today.

For the two-nights-art-and-[electronic]-music-festival site of musicx_ staged by MIK at Genochmarkt in Hirschstetten in 1220 Vienna, the cards were installed on the outer wall of one of the former market booths forming horizontal and vertical rows repeating themselves again and again; and remained there until the wind blew them away … | until the last market booths were torn down in 2010 giving place to the construction of office buildings and living compartment complexes …

REAL ONES ALWAYS SURVIVE or WOULD WE SAY NO? V. Wall Installation staged at